-Submitted graphic
Gateways like this will welcome people to Corridor Plaza, a development featuring stores, offices, apartments, a hotel and other amenities on what is now the Crossroads Mall site. Crossroads Plaza Development LLC, of Ankeny, finalized its purchase of the site Friday and plans to start construction this year.

A sweeping transformation of the Crossroads Mall site in Fort Dodge will begin this year under the guidance of a new Iowa-based owner.

The vacant wings of the mall that once were home to Younkers and JC Penney will be torn down this year.

A new retail structure facing Fifth Avenue South, the first of several planned for the site, will be built this year to house four to six stores.

And a new medical facility will be constructed on the north side of the property near First Avenue South.

Eventually, the rest of the mall will be torn down, and the site will be filled with a mixture of stores, multi-use buildings, an office building, a hotel and a roughly 10,000-square-foot green space. 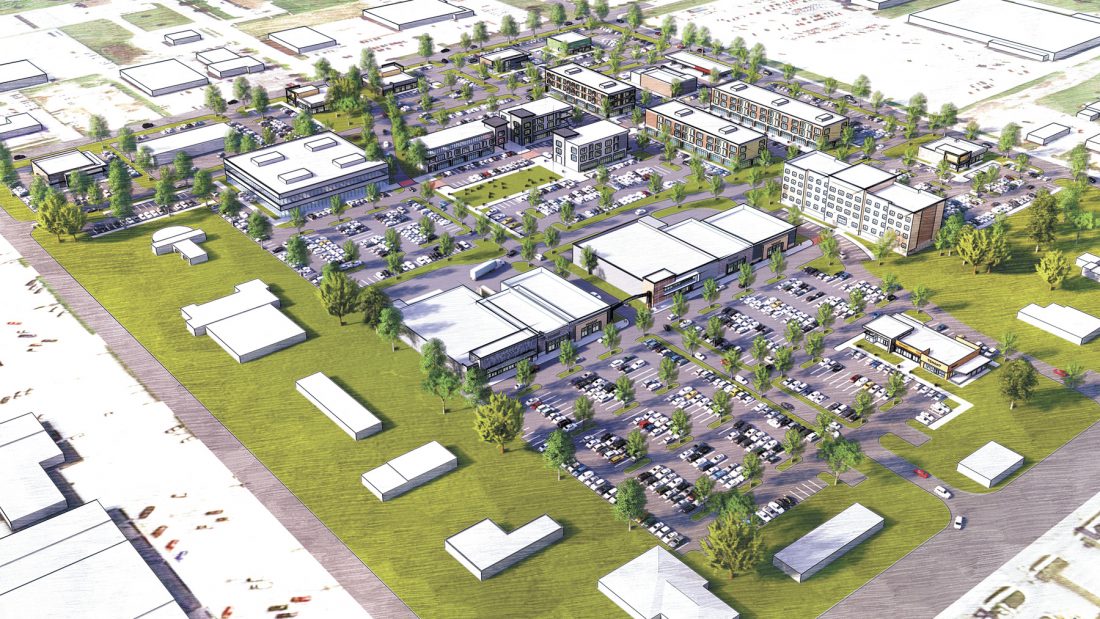 -Submitted graphic
This graphic shows what the completed Corridor Plaza site will look like when viewed from the southwest. Crossroads Plaza Development LLC has purchased the site of Crossroads Mall and will begin construction this year.

All that will be undertaken by Crossroads Plaza Development LLC, of Ankeny, which bought the mall property from Namdar Realty Group, Mason Asset Management and CH Capital, all of Great Neck, New York, in a deal that closed Friday.

The purchase price was about $3.3 million.

”We want to make this the focal point of the community for retail,” said Ben Garrett, development director of DCI Group, one of the firms that makes up Crossroads Plaza Development LLC.

Mayor Matt Bemrich described the plans as a ”catalyst project.”

”I think this will be the same kind of catalyst for changing retail culture that the original mall was when it opened,” he said. ”This will bring back the regional hub draw that Fort Dodge has traditionally had.” 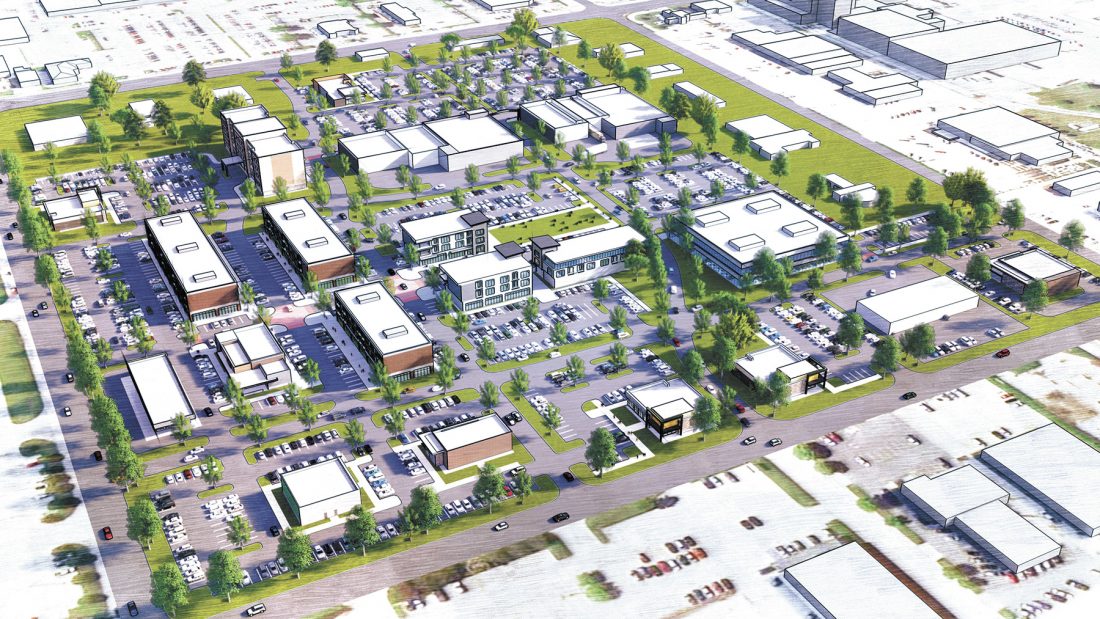 -Submitted graphic
When viewed from the northeast, the completed Corridor Plaza development on the Crossroads Mall site will look like this. The first new retail building on the site is expected to be built this year.

Dennis Plautz, the chief executive officer of the Greater Fort Dodge Growth Alliance, said retail is essential to the community’s status as a regional hub.

”It will be a draw for the region and a quality of life asset that we sorely need,” he said.

He said the plan, which consists of multiple buildings with different uses instead of one big enclosed mall, is ”characteristic and symptomatic” of the retail developments being created in trade areas similar in size to Fort Dodge.

The new owner has proposed eight retail buildings for the site. Two of those buildings will be large ones that will be home to four to six stores.

Also planned are seven mixed-use buildings that will have stores or offices on the first floor and apartments on the second floor. 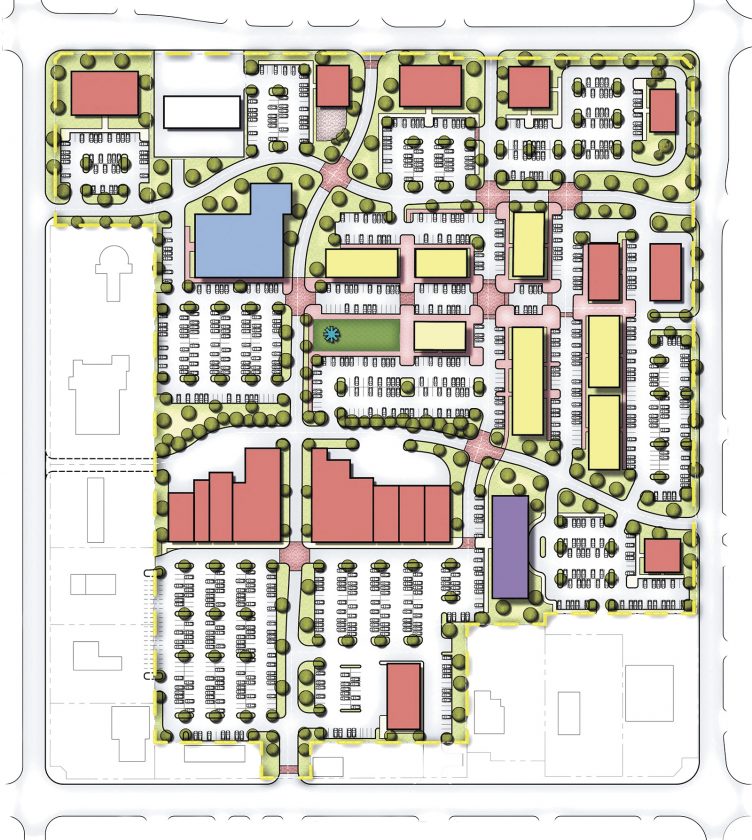 -Submitted graphic
An aerial view shows what the completed Corridor Plaza site will look like. Crossroads Plaza Development LLC has purchased the site of Crossroads Mall and will begin construction this year.

There will also be an office building, a hotel, a medical facility and a gas station.

A new section of South 27th Street will go through the site.

The entire complex will be called Corridor Plaza.

Some demolition and construction is planned for the site this year.

The former Younkers and JC Penney stores will be coming down this year, according to BJ Stokesbary, a partner in ATI Group, which is also part of Crossroads Plaza Development LLC.

The former Sears store was demolished in November.

Stokesbary said the first retail building to be constructed will go up this year east of the car wash that faces South 25th Street. The building will face south.

Stokesbary said a medical facility will be built this year along First Avenue South between 27th and 29th streets.

The Fort Dodge City Council has committed up to $18.2 million in aid to the developer. That money would reimburse the company for property acquisition, demolition and infrastructure improvements.

Plautz said the project would not happen without the help of the city government.

He added that the street, storm sewer, water main and sanitary sewer upgrades the city has completed in the mall area recently had ”a big impact on this development, the willingness to do this development.”

Today’s breaking news and more in your inbox


A third inmate with COVID-19 at the Fort Dodge Correctional Facility passed away Monday, according to an Iowa …