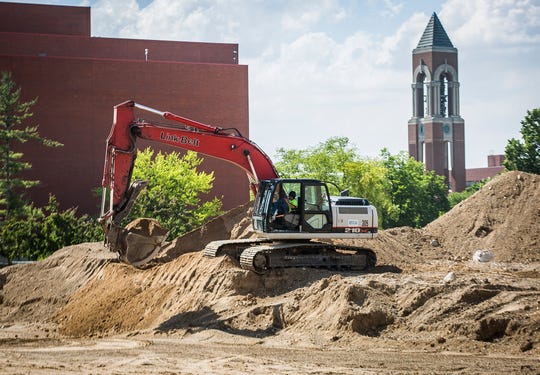 There is little left of the aging Emens Auditorium parking garage, which is being demolished to make way for a grand lawn in the heart of the Ball State University campus.

The East Mall will travel from The Village retail/residential district through campus as far north as the Jo Ann Gora Recreation Center. The mall will include a pedestrian-bicycle corridor, the grand lawn, other activity lawns, and the multicultural center currently under construction.

Summit Construction, Indianapolis, was awarded a $3.244 million contract for the multicultural center, expected to open in spring of 2021, at the northeast corner of Bracken Library.

The parking garage demolition work is scheduled for completion in August, and the grand lawn is expected to open during fall semester of this year.

The East Mall is designed to alleviate traffic, pedestrian and bicycle congestion on McKinley, the main artery through campus.

To replace the Emens parking structure, the New York Parking Garage, on New York Avenue north of Riverside Avenue, along the east edge of campus, is scheduled to open this summer. Built at a cost of $18 million, it will offer 600 parking spaces, covered bicycle parking and charging stations for electric cars.

“The new garage is a part of our long-range plans to remove parking and vehicle traffic from the central part of campus, enhance the campus’ beauty, and improve safety,” BSU President Geoffrey S. Mearns has said.

The East Mall is to run alongside the new Health Professions Building ($62.5 million); the currently under-construction foundational sciences building to serve as home to the chemistry and biology departments ($87.5 million); Emens Auditorium; Woodworth and Noyer residence halls; Pruis Hall; Bracken Library; the Whitinger Business Building; the multicultural center; and the R. Wayne Estopinal College of Architecture and Planning.

Other public works projects at Ball State include:

Future projects include renovation of the Starbucks in the Student Center.