The last time we saw some of the post-covid wasteland gripping the nation’s malls was back in November when we got a vivid reminder of what Bloomberg dubbed “carnage” among mall tenants as two major mall landlords filed for bankruptcy in one weekend, following their constantly growing list of bankrupt clients into Chapter 11 protection. The two mall REITs, Pennsylvania Real Estate Investment Trust and CBL & Associates Properties filed for Chapter 11 protection at the start of November, citing pandemic-induced pressures on their tenants and, by implication, themselves. Together the two REITs accounted for 87 million square feet of real estate across the U.S., according to court filings.

However, despite occasional minor blowups, since late 2020, the mall sector had been relatively stable on the back of mandatory forebearance as well as Universal Basic Income courtesy of the government, which has seen Americans unleash record retail sales in recent months as the latest government stimulus checks were deposited, keeping malls alive in a state of suspended animation at least as long as the government’s generous payments keep coming in.

Unfortunately, while there have been few “liquidity events” in a world where central planning by the government increasingly determines who lives another day and who have to file for bankruptcy today, the fundamentals of the mall sector have continued to collapse, and according to an analysis by Bloomberg, mall values in the US plunged an average 60% after appraisals in 2020, a sign of not only more pain to come for retail properties – even as the economy is reportedly recovering from pandemic-enforced lockdowns, and according to Goldman is even growing at the fastest pace on record… 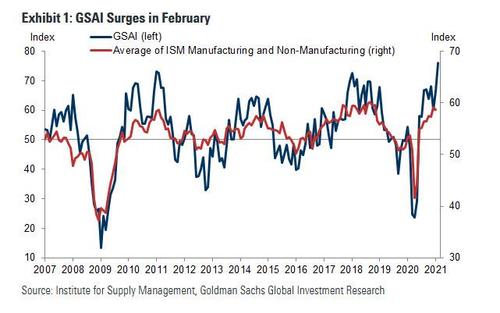 … but the clearest indication yet that a world of pain awaits the moment the government’s countless attempts to kick the can expire, and the sad reality of the US economy re-emerges front and center.

About $4 billion in value was erased from 118 retail-anchored properties with commercial mortgage-backed securities debt after bad debt and payment delinquencies, defaults and foreclosures triggered property reappraisals.

It gets worse: that average drop – which reflects the change in value since the debt was originated years ago, in many cases near all time high valuations – may in fact underestimate losses when the properties come up for sale, because so much retail real estate is in distress. And even worse: few buyers are willing to take risks on aging shopping centers as e-commerce continues to grab market share.

“It’s an eye-popping decline,” Gwen Roush, an analyst with DBRS Morningstar rating service who tracks commercial real estate, said in an interview. “When we’re forecasting a loss on these malls, we’re even further haircutting that value.”

And so, in anticipation of what will soon be the biggest market-clearing shock in mall history, the biggest owners, such as Simon Property Group, Brookfield Asset Management and Starwood Capital Group, have started to triage properties, walking away from money-losers while reinvesting in viable locations. Of course, the nightmare for US malls has long been coming with Amazon destroying brick and mortar outlets across the nation – covid only served as the last nail in the coffin:

The hammer blow, when it comes, will be catastrophic: according to Floris van Dijkum, a real estate analyst with Compass Point Research & Trading, only about half of the 1,100 U.S. indoor malls have a good chance of survival. The strong will get stronger while the weakest face abandonment or worse, he said.

In anticipation of this D-Day when debts will finally have to be settled, Simon, the country’s largest mall owner, is working with loan managers to restructure debt on underperforming centers or hand back the keys.

“Hope to make deals in some,” Chief Executive Officer David Simon said on the company’s latest earnings call. “If not, then they will no longer be part of our portfolio and we wish that new owner the best of luck.”

Simon’s Town Center at Cobb, outside Atlanta, which once appraised at $322 million received no bids at a courthouse foreclosure auction in February, according to a local news report. The company’s Montgomery Mall, near Philadelphia, was appraised at $61 million last year, a 69% drop from its 2014 value.

For the few malls that sold, prices were down just 1.8% in January from a year earlier, data from Real Capital Analytics Inc. show. That’s because most of what traded was high-quality, according to Jim Costello, senior vice president at the research firm. It’s the bad ones that end up no bid.

Some more optimistic mall sellers are waiting for the economy to recover before trying to unload properties, hoping for higher prices.
Unibail-Rodamco-Westfield, owner of 37 U.S. shopping centers, said in its fourth-quarter earnings statement that it’s looking to 2022 to “significantly reduce our financial exposure to the U.S. when the investment market reopens.”

Translation: we now know who the biggest bagholder is.

Meanwhile, for many lower-end centers, the value is simply the cost of the land minus the cost of demolition, according to Costello.

“The orange tile and brown carpeting is just going to be torn down and plowed under and eventually trade at a price someone can build something else there,” he said.

Meanwhile, the pent up defaults are piling up: debt management on about 17% of retail properties with CMBS loans has been transferred to workout specialists because of delinquencies or other financial issues, second only to hospitality properties, with 24.5% in special servicing, data from Trepp show. This means that sooner or later, there will be a burst of defaults once the dam doors open.

Rating services have downgraded hundreds of bond tranches, many of them on mall debt, as concern rises that investors won’t get repaid, according to Roy Chun, senior managing director at Kroll Bond Rating Agency. It’s only a matter of time before the money stops flowing, he said.

“It’s the sixth or seventh inning of a game,” Chun said. “But you already know the winner and the loser.”